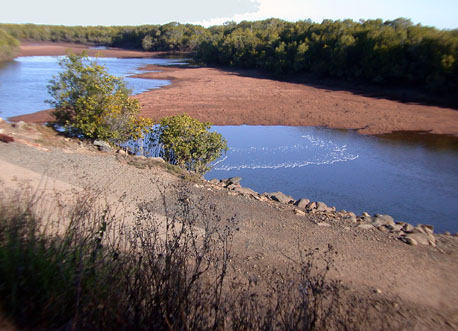 Jimmy, Ann and I shined our flashlights along both sides of mangrove-lined Vine Creek while Gunter worked the giant spotlight. Captain Ken, whom we’d just gotten to know and respect, was steady at the helm, gingerly easing Pacific Bliss through the shifting sandbars. I glanced at the depth sounder. It showed less than four feet, but Ken’s craggy face was unperturbed. The sky above and the creek below were dark as witches brew. It was a little after midnight in Queensland, Australia and here we were, searching for crocs.

“Just keep on watching for them red eyes,” said John Bates, the owner of Mackay’s Boatyard, where we would haul out our vessel. “The three of us know this creek, we’ll keep ‘er off the bars.” 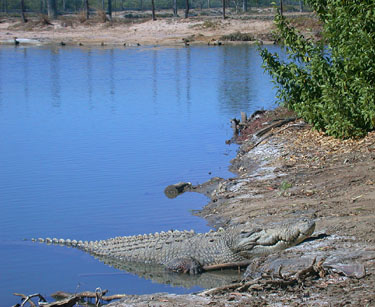 There were seven on board for this midnight excursion—each of us with a job to do. Pacific Bliss was in good hands, but even so, the adrenaline ran high.

I would not have wanted to do this by ourselves! The voyage up the shallow creek had been hair-raising enough, but when we arrived, John would have the most difficult task of all. He planned to jump into the croc-infested creek to fasten Pacific Bliss onto a truck trailer that would pull her up the ramp, out of the creek, and on to dry land—what sailors call ‘the hard.”

The dawn at Mackay Marina was gold and bright. It was a good omen for August 18th, the day we would prepare for haul-out. Right after breakfast, Jimmy and Gunter began to take down the main. (They had already taken off and stored the jib the previous day, after our arrival from the southernmost Whitsundays.) Within three hours, the men 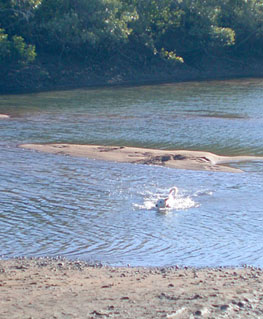 finished their task and were ready for a ‘smoko,’ the Queensland version of a coffee break. Knowing

that we would disconnect and defrost the freezer, Ann and I made a huge casserole with various and sundry meats and vegetables that could be quickly re-heated for our last evening meal dockside. Then Gunter and I attempted an Australian ‘pensioner’s nap,’ knowing that we would be up most of the night. But our attempt at napping failed. We were simply too pumped. I completed the defrosting of both fridges and then purchased large blocks of ice to convert them into iceboxes for living on land. We finished our chores far too early. Now we had little to do but worry and wait.

There would be no sunset tonight. As the sky turned from a gray haze to thick black, each of us nurtured our own Dark & Stormy— a unique blend of Bundaberg rum and ginger beer. We dawdled over our last supper together. We still had 2 1/2 hours to go.

Gunter paced the salon, excited and irritable, like a new father-to-be. We attempted to quiet him down by suggested we all watch a DVD movie on the laptop computer.

“A movie?” the Captain sputtered. “There’s no time. They’ll be here in an hour or so to talk with us and get us all set up.

“What DVDs do you have?” Jimmy interrupted calmly.

Gunter went down to the cabin and selected a black-and-white: Two Women by Sophia Loren. We passed the time by listening to the old movie, unfazed by the scratchy soundtrack. Gunter went out on the docks periodically to check for the guys, then returned to pace some more, periodically glancing at the little screen. As the movie reached its climax—Sophia in war-torn Italy hugs her raped daughter who has suddenly grown up to stay out all night with an Allied soldier who gives her nylons—the clock said 11 PM. 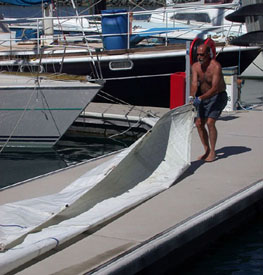 Where are they? Perhaps they can’t get through the gate.” Our Cat proved far too small to hold Gunter’s anxiety. He rushed out to check again and again. 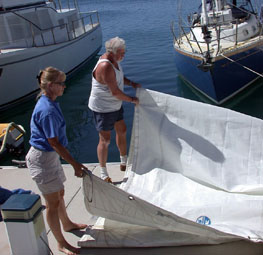 But, of course, the pilots had keys to the marina, and we all knew that. They were familiar with the routine. By 2315, Gunter called them using Jimmy’s cellular. “They are on their way,” he exclaimed. “Let the adventure begin!”

John and his two helpers came on board and took charge. Ken was the assigned helmsman. He took the wheel, backed out from the dock, carefully motored around the breakwater in the pitch black, and then headed out to sea. Ken was approaching the two islands opposite the Pioneer River channel when I asked John, “Why don’t you just go around the breakwater and head into the river channel?” I recalled the diagram on the back of the promotional coasters he hands out (see insert). 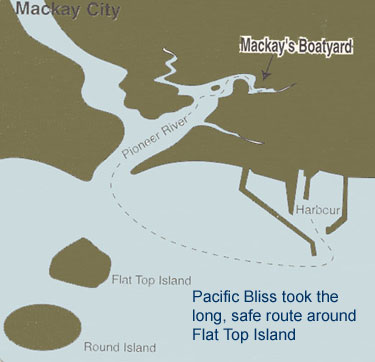 “It’s still a little before midnight, high tide..still a little shallow there. Besides, I want to kill some time because high tide comes later further up the river.” I hadn’t thought of that. Of course, it would take awhile for the far reaches of Vine Creek, a tributary of the Pioneer River, to fill in.

I recalled our visit to Mackay’s Boatyard when we arranged 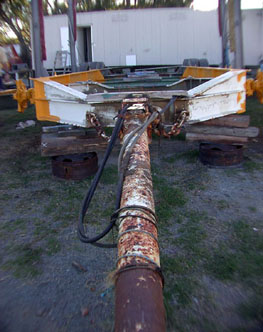 for the haul-out. We had told John we wanted to haul out sometime in August, preferably near the end of the month.

“You don’t have much choice of dates,” he had replied. “It all depends on the tide.” He looked up the tide tables. “Looks like the highest tide in August is on the 19th. Unfortunately, high tide that day is a little after midnight. But you’ll need all of the tide to get ‘er up here.”

“Perhaps it’s a full moon, or close to it…” I faltered, my mind still grappling with the idea of going up a creek at night.

“No luck there…looks like new moon. It will be dark, but no worries. We’ve done it many times before.”

He showed Gunter the rig he would use. I went down to the creek to take a look at the ramp where Pacific Bliss would be pulled out. Even during the daylight, it looked plenty dangerous to me. 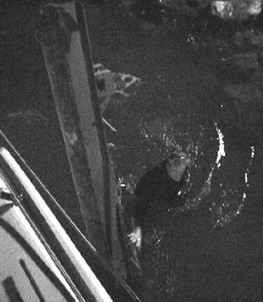 John’s dog followed, then ran ahead to frolic in the creek. John and Gunter came up, having worked out the details of the haul-out.

“Your dog just went in that croc-infested creek,” I said to John. “What if he gets attacked?”

“That’s why I have more than one dog.”

“And I understand that you will be jumping in to fasten the gear to the trailer when we pull out?”

“That’s why I have my dog jump in first.”

“These Aussies,” I thought. “Straightforward and practical. No fear!”

John had seemed confident then, and again later, as we motored around Flat Island and Round Island, then headed slowly toward the Pioneer River. It was past midnight and the channel was barely filling up. My eyes were glued to the depth meter. It showed less than 8’ beneath our hull. We had yet to enter the shallow river channel. 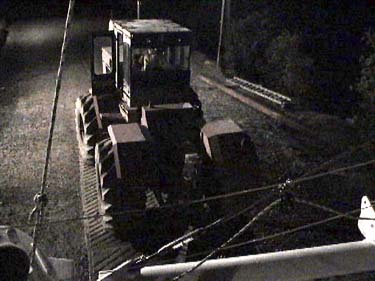 The time passed ever so slowly as we inched up Pioneer River, all eyes riveted on the water, shining opal under the spots. Ken maneuvered the Cat expertly around sandbars I could barely make out. And then we were making a wide turn into Vine Creek. I could almost touch the mangroves lining the shore. But I couldn’t see the crocs I was sure were lurking there. Six feet, five feet, four…I took turns squinting for crocs and pacing back behind Captain Ken to stare at the depth sounder.

Finally Ken turned Pacific Bliss toward the haul-out ramp and gently eased her forward. Another worker backed the big rig down to meet us. The dogs leaped into the water. Next there was a loud splash. John had jumped in?clothes, boots, and all. He quickly fastened 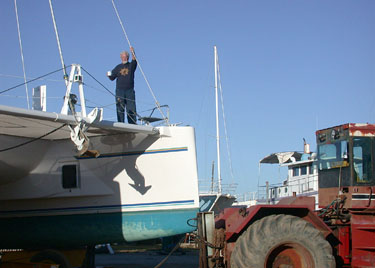 Pacific Bliss to the trailer, obviously sure of what he was doing and conditioned to do it in record time. Soon we were moving steadily up the ramp.

“What if the truck slipped on the loose gravel? Could those lines snap?” My eyes were blinded by the bright yard light. I wanted to see everything. As if that could make a difference! I was barely breathing.
Soon we were all cheering and the dogs were all barking, mimicking our joy. We did it! Pacific Bliss was on level land in the ship’s yard. We could stay there, on the trailer, for the rest of the night.

John pointed out the bathrooms and showers. He explained that later in the week, a giant crane would come to the yard from Mackay City. Pacific Bliss would be put into a sling, lifted off the trailer and onto four stacks of wood topped 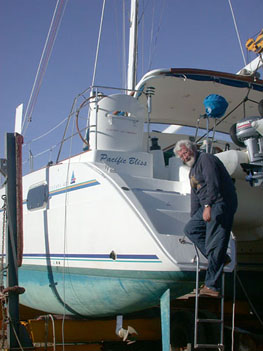 with tractor tires. There she would remain strapped down ‘on the hard’ for the cyclone season. Getting her onto those blocks would be our next adventure 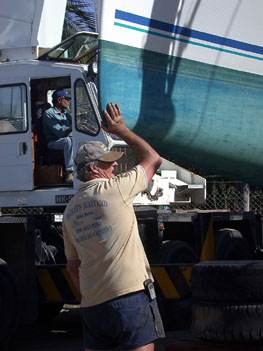 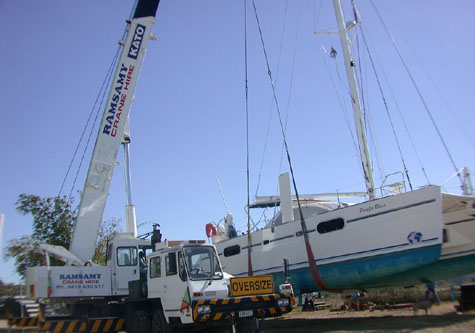 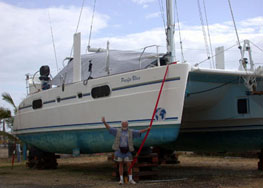 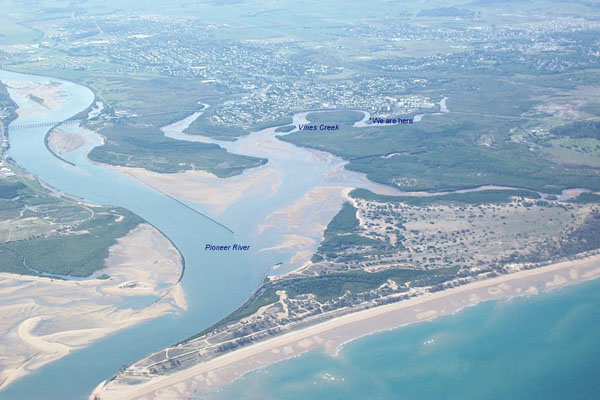